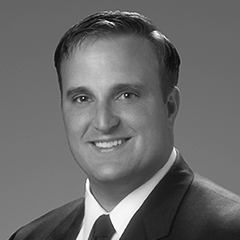 Nick graduated from Cloverleaf High School in Lodi, Ohio and attended the United States Air Force Academy. He was recruited as a varsity offensive lineman for the Fighting Falcon Football team.  As an active-duty officer in the Air Force, Nick served as a buyer and contract negotiator on the MILSTAR Satellite System Program at Hanscom Air Force Base, Massachusetts and as an Administrative Contracting Officer at GE Aerospace’s aircraft engine plant in Evendale, Ohio.  He earned an MBA with an emphasis in finance from Western New England University and honorably separated from service to attend the University of Akron School of Law in 2000.

Nick has been with Brouse McDowell for the entirety of his legal career.  He has served as an elected member of the firm’s Executive Committee and on the firm’s Associate Review Committee.  Nick’s focus is representing clients in litigated matters, however, his legal practice has touched nearly every area of law.  He has extensive experience in business and shareholder disputes, enforcing non-competition agreements, and defending against product liability claims.  Nick has handled large, complex probate and estate litigation involving high net worth clients and closely held businesses.  Over the past thirteen years, Nick also has established an expertise in matters involving title insurance policies and real estate disputes.  Clients have called upon Nick to represent them in high stakes litigation matters in state and federal courts all over the United States.